You’ll never believe how easy it is to build a messenger bot!

It’s true that there are many different messaging apps that have messenger bot capabilities. But it can’t be denied that in 2015, Facebook Messenger 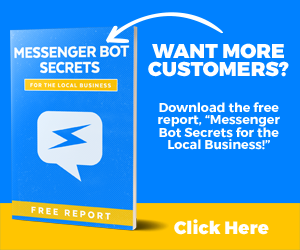 was one of the first to release these bots and that they’re still the biggest in the market. It’s for this reason that when local businesses decide to hop onto this trend, they start with Facebook Messenger bots. But, there’s one requirement that many business owners don’t understand, and it can trip them up right from the beginning of the process.

That is that Facebook Messenger bots have to be connected to a page in order to run. That’s a page, not a profile. Too many business owners get excited about the idea of jumping into this new technology and then waste time fiddling around on their Facebook profile page trying to figure out how to do it. But it can’t be done.

This is again because Facebook Messenger bots have to be connected to a page. A page that’s been created for customers and that ideally, is a public page (although that’s not a requirement for the bot). Luckily, creating a Facebook page for your business is very easy. Head on over to facebook.com/business and then follow the prompts on the page. They’ll include choosing a category for your page, a profile picture, filling in the About page, uploading pictures, and more. The entire process takes about ten minutes.

Once that’s done, then a Facebook Messenger bot can be created. Best of all, not only does the page allow you to create a Messenger bot, but it also helps you promote it. That’s because once the bot is created, an icon will be displayed on the page letting customers know they can communicate with you through the bot, promoting it to anyone who happens to land on your page. The two essentially work together to make your page, and your Messenger bot, more successful.

Creating Facebook Messenger bots isn’t hard. But, you’ll find it nearly impossible if you don’t have a Facebook page. Start with this simple step, and then continue on with the other few simple steps that allow you to create a Messenger bot. Yours will be up and running in no time!